The Link Between Teeth and the Taj Mahal 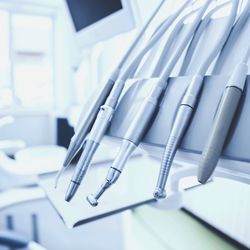 Researchers at Princeton University’s Department of Civil and Environmental Engineering have discovered that hydroxyapatite, a calcium compound found in teeth and bones, can be used successfully to protect marble structures.

The research team set out to find a way to protect landmarks and other important pieces made of marble from the harsh elements that cause them to crumble and decay over time. Although marble is fairly durable, it’s especially susceptible to damage from exposure to acidic substances. For this reason, pollutants and weathering can have an effect on the ability of these structures to withstand the test of time, especially outdoors.

Two of the first things that occur when marble begins to weather is a loss of polish and a loss of details in the carved and decorative surfaces. For example, when you visit a cemetery and see headstones that are no longer legible, this is most likely result of weathering over time. More extensive damage to marble includes discoloration, chipping, cracking, flaking, erosion, staining, peeling, sugaring and efflorescence (white salt deposits).

Some of the world’s most important cultural landmarks are made at least partly of marble including the Taj Mahal, the Parthenon, the Washington Monument and the Lincoln Memorial to name a few. The preservation of these historic icons located all over the world is something that has researchers focused on finding a solution. The Princeton research team believes they have found one that is both cost-effective, non-toxic and quick acting (in a little as 24 hours).

The research team applies coatings of this new substance made of hydroxyapatite in thin unnoticeable layers. It penetrates deep into the stone and strengthens and protects it. The thin layers help the marble maintain it’s color and natural appearance.

"Enamel is the hardest element in the human body. It’s made primarily of the mineral hydroxyapatite. It’s the hardest biological material known to man and is harder than even bone."

One of the other benefits to this new method that the research team believes sets it apart from others is that it will last for decades. Since many of the landmarks are so large, it wouldn’t make sense or be feasible to use a treatment that requires reapplication with any level of frequency.

Large landmarks aren’t the only surfaces that people are interested in preserving and protecting. Some of the most famous sculptures in the world are made of marble. Due to its translucency and availability, marble was and still is a favorite material among some of the world’s most talented sculptors and artists. Venus de Milo which can be found in the Louvre in Paris, France and Michelangelo’s David which can be found in Florence, Italy are both made of marble.

The research team from Princeton plans to work with sculpture restoration specialist at the Palace of Versailles on a pilot project to further apply their findings in the name of art preservation.