Protecting the Teeth of America's Youth 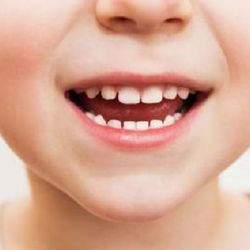 The state of children’s oral health in the United States is no less concerning today than it was in the past. Early childhood caries, also more generally called cavities, is the most common chronic disease affecting children today. The upper front teeth are most frequently affected, but all teeth are vulnerable to decay.

In the first three years of a child’s life, 20 baby teeth will break through the gum's surface where they have been located since birth, and become imperative to their ability to chew and speak. Unfortunately, it’s very common for those baby teeth to be left alone until the child reaches toddlerhood or even until their first dental exam. What many don’t realize, is that tooth decay in babies is a real possibility and with just a few simple practices can be prevented. Dr. Martin Abelar, DDS, one of Southern California’s premiere dentists believes healthy baby teeth are the foundation for a lifetime of good oral health.

"Since the primary teeth eventually fall out and permanent ones take their place, many people think baby teeth are no big deal," Abelar said. "But if a child loses a tooth too early, the rest of the teeth may shift. When it comes time for the permanent tooth, there may no be enough room and crowded, or crooked teeth become a problem."

Abelar recommends wiping toothless baby’s gums with clean gauze pads until their teeth come in. Once they do, a toothbrush and water, and eventually a tiny amount of fluoride toothpaste at age two, can prevent decay and get them comfortable with the process of toothbrushing from an early age.

Other tips recommended by the Center for Disease Control include the following:

Somewhere usually between the ages of five and seven, children lose their first tooth. During this time, the first molars appear, which are vital to the shape of the face and the position of the rest of the permanent teeth that will come in over the course of the next eight to 10 years. It becomes even more important to maintain a healthy oral care routine and to monitor the intake of sugar-filled drinks and food. This can be particularly challenging for parents. By this age, many children spend time at school and sports without the supervision of their direct caregivers.

"Unless your child is competing in sports that require excessive physical activity such as all day tournaments in the heat, there is absolutely no need for sports drinks," Abelar said. "In fact, there are healthier ways to replace electrolytes and rehydrate after a day of intense training with water and snacks such as bananas, nuts, celery and avocados. The constant consumption of sugar-filled drinks such as sports drinks, sodas and even fruit juices are having devastating effects on the teeth of children and youth in America."

Because you can’t always monitor everything your child eats and drinks, the CDC recommends school-age children get dental sealants. This simply process involves painting a protective covering on the cavity-prone back teeth where grooves and ridges make it easy for bacteria and debris to hide.

Abelar says that the solution to preventing cavities is simple, even though up to 60 percent of children don’t receive the treatment.

"Dental sealants are highly effective at thwarting decay in school-age children. In fact, 80 percent of cavities can be prevented with dental sealants," Abelar said. "Children that don’t have them are shown to get almost three times as many cavities in their childhood."

Education is the key to helping the youth of our nation fight back against the chronic occurrence of cavities that keeps them from school and causes pain and sometimes permanent damage. A consistent and effective oral care routine is the most important way to maintain a healthy mouth. Combine that with a balanced diet and preventative care such as sealants and fluoride varnishes, and you have the recipe for a healthier childhood.