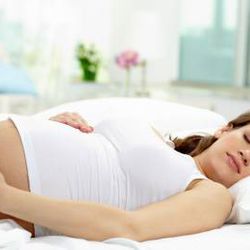 Researchers at Brown University have determined that women who have been diagnosed with obstructive sleep apnea may be at an increased risk of experiencing serious complications during pregnancy.

A Study on Sleep Apnea’s Effects on Pregnancy

Using the U.S. National Perinatal Information Center database, the medical records of over one and a half million pregnant women from 2010 to 2014 were analyzed. Only 12 percent of those women showed a diagnosis of obstructive sleep apnea, but from these numbers, they determined the women were 174 percent more at risk for admission in the Intensive Care Unit than those without the sleep disorder. The average length of hospital stay was three days for women without obstructive sleep apnea but was five days for those with it.

When breathing repeatedly starts and stops during sleep, obstructive sleep apnea may be the cause. It’s the most common form of sleep apnea and can be a serious concern when it comes to your health according to Dr. Martin Abelar, DDS, a San Diego area dentist who treats patients for this sleep disorder.

"As breathing is blocked during sleep and then restarts, the person may gasp, snort or awaken with a feeling of choking. Sometimes, the only noticeable symptom is snoring," he said.

It is often noticed first by a partner who is awoken in the night by snoring, gasping or other sounds made by the person suffering from symptoms of sleep apnea. Many times the patient is unaware they are experiencing any of these symptoms during sleep because it usually doesn’t wake them up all the way.

However, daytime sleepiness, waking up with a sore throat or dry mouth, irritability and headaches could all point to obstructive sleep apnea and may be more noticeable since these symptoms occur during the day when the patient is awake and aware.

According to the National Sleep Foundation, women are less likely to be diagnosed with sleep apnea, but that doesn’t mean they aren’t at risk as well. Researchers believe women present with more general symptoms such as insomnia or daytime exhaustion and because they don’t fit the mold of the classic sleep apnea patient of an overweight, middle-aged male, they often go undiagnosed.

In fact, a study published in the European Respiratory Journal determined that of the 400 women aged 20 to 70 in their study, approximately 50 percent experienced sleep interruptions due to obstructive sleep apnea. They determined some of the factors that influenced the disorder were related to obesity, hypertension and age.

"If you feel tired and exhausted on a daily basis, you should visit a medical professional to rule out something like sleep apnea," said Abelar. "Sleep Apnea is diagnosed with a sleep study typically that analyzes oxygen levels, brain waves, airflow, movement and heart rhythm while asleep. Once diagnosed, treatment is usually a matter of personal preference."

The most common treatment for sleep apnea is a machine called continuous positive airway pressure, or CPAP. It forces air pressure gently through the airway to keep it open all night with the help of a mask. Some patients report finding them annoying or uncomfortable so alternative therapies have been developed such as an oral appliance.

"A mandibular repositioning device, or MRD, is another way to treat those with mild to moderate sleep apnea. This oral appliance is custom made to fit perfectly to the patient's mouth," said Abelar. "It holds the jaw in a forward position to help keep the airway open during sleep."