A Visit to the Dentist Could Help Rheumatoid Arthritis Sufferers 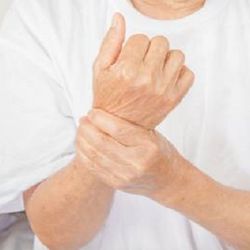 Rheumatoid arthritis is a chronic, painful, inflammatory disease that affects the joints. There’s no cure for the disease, but medications and therapy often help relieve symptoms. Thanks to scientific research, those suffering from gum disease, also known as periodontal disease, may find relief from their rheumatoid arthritis symptoms by seeking professional oral care to treat their gum disease.

A study was published in the Journal of Periodontology that discovered that people suffering from RA were eight times more likely to develop gum disease than those without it. This brought to light the proverbial question of "which came first the chicken or the egg" to the forefront of research on gum disease and rheumatoid arthritis. Does gum disease play a role in the development of RA or does RA create an environment that encourages gum disease?

In the medical journal, PLoS Patheogens researchers published the discovery that the bacteria that causes gum disease can lead to earlier and more progressive onset of RA in addition to more severe symptoms. These findings confirmed the strong connection between gum disease and RA.

More recent research, such as a study published in the medical journal Arthritis & Rheumatology suggests that the bacteria that cause gum disease may actually trigger autoimmune disease for some RA sufferers.

This collection of research shows that it’s still unclear which comes first, but what is certain is the connection between the two diseases.

Inflammation is the Link Between Gum Disease and Rheumatoid Arthritis

After numerous studies showed a consistent connection between the two diseases, it was time to determines what that link was. While more research is still needed, it seems clear that one of the links is inflammation said Dr. Martin Abelar, DDS, a leading San Diego area dentist.

"Inflammation has been shown as the link between periodontal disease and heart disease, along with diabetes," said Abelar. "So it makes sense that the inflammation caused by gum disease can also be related to the inflammation found in RA patients."

According to the Arthritis Foundation, relief from joint pain and stiffness can be found in an unlikely place: a visit to the dentist. A study conducted at Case Western Reserve University in Ohio tested this theory by taking 40 RA patients and breaking them into two groups.

The first group was educated by a dentist on how to care for their teeth with a good at-home routine. The second group was given a deep cleaning called scaling and root planing that is used to treat gum disease patients. It involves removing bacteria from the root, gum line and teeth to stop the inflammation and infection caused by a build-up of plaque and tartar.

After six weeks, the patients returned for an evaluation. The data showed that the group who received the scaling and root planing experienced a great improvement in some of their RA symptoms. Less morning stiffness and reduced pain overall, along with less swelling and joint pain was reported. The researchers also determined that the protein in the blood that triggers inflammation had actually decreased in the deep cleaning group.