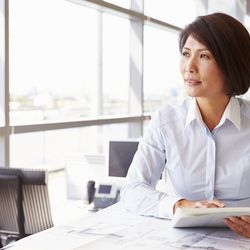 With the tail end of the baby boomer generation nearing 60 years old and many Americans set to retire in the next few decades, oral health researchers have mounting concerns about how seniors will receive care for their oral health. Between the loss of insurance coverage and serious deficiencies in coverage through programs like Medicare, seniors could struggle to get the care they need as they grow older.

Unfortunately, studies have shown that in addition to periodontal disease and tooth loss, poor oral health can contribute to a host of medical conditions that frequently affect older people, like hypertension, diabetes, cancer and even Alzheimer’s disease. Now a new study by researchers at Rutgers University in New Brunswick, New Jersey, has found that poor oral health is having a dangerous effect on the over-60 Chinese American community.

The study found that approximately half of all participants in the study had some kind of oral health trouble - either with their teeth, gums or both teeth and gums. Of those who reported oral health problems, many reported cognition and memory issues as well. Furthermore, about 25 percent of those in the study noted that they experienced dry mouth. Those who had dry mouth also had higher stress levels than those without dry mouth.

The study shows that older, less affluent immigrant populations are at a higher risk of poor oral health and the problems that go with poor oral health, such as dementia and stress. Researchers in the study suggested that more advocacy and outreach to these communities may be necessary to ensure that vulnerable members of the community are getting the care they deserve. They also noted that things like lower socioeconomic status and language barriers may also be holding these members of the community back from getting the help they need.

Though the focus of the study was Chinese American citizens only, the study could most likely be replicated with any immigrant or even native community, although some variables may be different. If you have a senior in your life, help them by checking in on their oral health. Are they able to brush and floss their teeth on their own? Are they able to afford and attend dental appointments? Are they able to articulate any oral health problems they may be having? If you can aid in any of these areas, you could literally save a life.

A Dental Implant That Protects Teeth From the Inside