The Hidden History of the Tooth Fairy 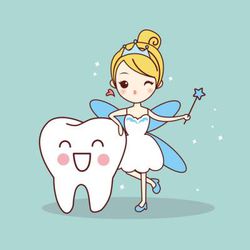 When children are little, they expect adults to be experts on all subjects. Many parents and even educators find themselves "winging it" on occasion or simply having to stall while they go find the information they need.

Rosemary Wells found herself in this predicaments when her students at Northwest University’s School of Dental Hygiene began asking questions about the Tooth Fairy. During her search to provide answers to her students, she found very little information on this mysterious but well-loved childhood icon.

She began researching in depth, reading through folklore and stories passed down among many different cultures. She did surveys and studies to gain insight. In fact, she became so involved in her quest that it quickly turned into a passion and she decided to open a Tooth Fairy Museum in her home in Deerfield, Illinois, in 1993.

The museum offers a tour, and the rooms are filled with artwork, dolls, books and over 500 drawings and stories created by children around the nation. She also has a collection of tooth holders from around the world. One of the strangest has a spot for each baby tooth in a model of pink gums.

Wells' research was fascinating as it found that 74% of Americans believe the tooth fairy is a female and that 97% of parents had positive or neutral feelings about her.

She concluded that the American concept of a tooth fairy probably came from a blending of a generalized happy, good fairy from Europe, specifically from England, Ireland and Scotland and a tradition involving mice and rats from Central and South America.

In Spain, he is Ratoncito Perez and in France La Petit Souris. The "Tooth Mouse" as they refer to the mythical creature in some literature is the epitome of a good sturdy show of teeth. As a prominent feature in stories and science the teeth of these animals are notoriously strong and large; and so, as an offering to these strong-toothed characters, they too hoped their children would be blessed with healthy, strong adult teeth in the place of their lost baby teeth.

It seems to be widely accepted that these traditions didn't stem from boredom but necessity and comfort. Losing baby teeth can be a scary experience for small children who don't yet grasp the difference in the permanent and temporary nature of things. Leaving gifts or money seems to help transition them into the world of growing up while helping distract them from the confusion of that empty spot in their mouth.

Dr. Abelar recommends cleanings every six months, even for children, and will be happy to help your little ones understand how their teeth work and grow together as they make the transition from little kid to big kid. Call us at 858-866-9692 for more information and resources.