More Evidence That Poor Oral Health May Cause Diabetes 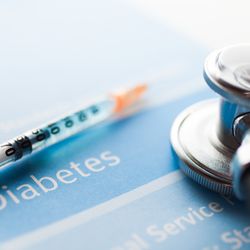 Another study has been released connecting poor oral health to diabetes. While it has long been suspected that the gum disease periodontitis contributes to or causes type 2 diabetes, the new study provides further evidence of the connection between the two diseases.

Periodontitis, or gum disease, occurs when the gums become infected with bacteria, inflaming the gums and allowing the bacteria to enter the bloodstream. That bacteria can then travel throughout the body, causing a host of ailments including diabetes, stroke, cancer, heart disease, heart failure and possibly even Alzheimer’s disease.

Type 2 diabetes occurs when your body does not properly utilize insulin to bring glucose into the cells, causing irregularities in the blood sugar. While diabetes and oral health may not seem interconnected, the study, conducted by Seoul Hospital and Ewha Woman's University College of Medicine in Seoul, South Korea, aimed to highlight that connection.

To conduct the study, researchers analyzed the data from more than 180,0000 patients in the National Health Insurance System-Health Screening Cohort (NHIS-HEALS) in Korea. The data included medical conditions and the oral health and hygiene habits of patients.

The study found that 17.5 percent of patients in this group had periodontal disease. Over a 10-year period, 31,545 of those patients developed diabetes, which was the equivalent of 16.1 percent. Patients who were missing teeth increased their risk of developing diabetes by 21 percent.

Conversely, patients who brushed their teeth three or more times a day reduced their risk of developing diabetes by 8 percent.

"What this shows us is that people who don’t take care of their teeth have a higher risk of developing serious diseases and illnesses later in life," he says. "It should be a good impetus for oral health care, in addition to the benefits already provided by excellent oral hygiene, such as clean teeth, reduced cavities, no gum disease and fresh breath."

While it is unclear from this study if improving oral health lessened the severity or reversed diabetes in patients who either already had the disease or developed it during the study, Abelar says improving your oral health routine can’t hurt.

"While we don’t know for sure what effect brushing has on patients who already have diabetes, there is clearly strong evidence that it can help prevent diabetes in patients who do not currently have this disease," he says.