When Should Babies Say Bye-Bye to Bottles? 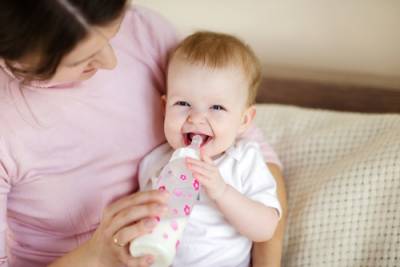 Whether you’re a first-time parent or a seasoned pro, it’s impossible to know everything there is to know about raising babies. This is especially true when it comes to caring for your baby’s teeth. Perhaps that’s why nearly 35 percent of children don’t see their family dentist for the first time until after their second birthday, more than a full year after the American Academy of Pediatric Dentistry's (AAPD) recommendation of age 1.

But even the most diligent parent can still have questions about their children’s teeth and still may not know when their children should meet certain oral health milestones. One particular milestone that many parents may miss, or may not realize the importance of, is the discontinuation of the baby bottle. Though it may not seem dental-related, extended use of baby bottles can be harmful past the age of 1. Dr. Martin Abelar of San Diego, California, explains why.

"We often think of outgrowing baby bottles as a sign of maturity, but regardless of whether the child is ready to part with the bottle, past a certain age, bottles are simply not good for the teeth," says Abelar.

That’s because the soft nipple of bottles makes it easier for children to drift off to sleep with the bottle still in their mouth, often leaving a puddle of milk or formula in the mouth with it.

"Milk and formula may be healthy, but if you leave it sitting on your teeth all night, you’re just asking for tooth decay," says Abelar.

Children must adapt to a new cup and a new style of straw - whether they’re ready or not, says Abelar.

"It can be a difficult transition for some kids," he says, "but most kids adjust eventually."

Abelar says parents should aim to remove the bottle around age 1 and replace it with a hard-topped sippy cup, not one with a flexible straw.

"The flexible-topped sippy cups make transitioning a little bit easier, but they defeat the purpose of switching away from the bottle," he explains.

As for children who are still breastfed beyond the one-year mark, Abelar says it’s OK to keep doing so as long as the mother and child are comfortable. But he cautions that beyond age 2 there is an increased risk of cavities for breastfed babies.

"This doesn’t mean you need to stop breastfeeding at age 2, but treat breastfeeding just as you would any other meal and brush your child’s teeth afterward," says Abelar. "Most importantly, make sure they are not nursing to sleep. Brush their teeth before bed, and after that only offer water until morning."

Technology is all around us, from smartphones to TVs that run channels on apps to entire electric systems ...

What It Takes to Be a Dentist

Spring is a season of big changes and new beginnings - and not just in nature. For some, ...

The inside of your mouth can be a mysterious place. Between those temperamental gums, your tough but sensitive ...

Common-Sense Ways to Reduce the Risk of Coronavirus

With coronavirus (COVID-19) spreading around the globe and grabbing international headlines, it's natural to be worried about your ...

An estimated 125 million people around the world have the skin condition psoriasis. Psoriasis is an autoimmune disease ...