The Opportunities of a Smile 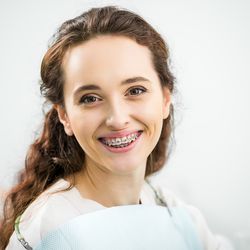 A study released by Princeton psychologists has determined that after looking at someone for only a tenth of a second, they make a judgment about their personality based solely on their appearance. That is faster than it takes the average person to blink.

The study found little hope of redemption for faces that received negative feedback. They discovered the original judgments, made in their one-tenth of a second glance, did not change after longer exposures to their faces.

The two most notable character traits they found affected in that split second glance were trustworthiness and attractiveness. Early theories on this suggest that we have learned the value of recognizing sincerity and knowing who is a trustworthy stranger very quickly throughout our evolution due to the nature of its importance.

This study is only one of thousands that point to the trend that physical attractiveness increases a person’s opportunity and quality of life. It is widely believed that people who are regarded as more attractive get more positive attention. They also have more confidence which leads to being perceived as even more attractive, as science has confirmed.

Ask any number of people walking down a busy intersection in San Diego what they notice first when meeting someone new and they will likely answer, "Their smile." Next time you are talking with someone new, pay attention to where your eyes drift as you converse. Most of us are drawn to the mouth, especially when they are speaking or if you are looking at a photograph.

People often make assumptions based off how often someone smiles. People are viewed as more reserved, safe and sometimes even negative that do not smile very often. Those who smile frequently are perceived as confident, fun and positive.

Not only is smiling important in person, but in an era of online resume sites and social media pages being such big players in our day-to-day lives, the average person's face is viewed much more than in was in generations past. Businesses devoted to helping people promote themselves on these platforms encourage users to feature profile pictures with open mouth smiles to increase positive perceptions. This can be hard for those who are not confident in the appearance of their teeth.

Dr. Martin Abelar, DDS, is in the business of creating beautiful smiles. He was trained at the Las Vegas Institute for Advanced Dental Studies, made famous by the show Extreme Makeover, and is on a mission to educate people on how accessible that perfect smile is to anyone who wants it.

"There’s a reason so much emphasis is placed on your smile being the first thing people notice about you. It’s because it’s true. A beautiful, white smile can be the difference between being remembered at that job interview or catching the eye of the person across the room you are attracted to. It opens doors to an entire world of opportunity that most people never even consider."

In fact, Dr. Abelar feels the sky is the limit. He even offers complete smile makeovers at his practice in San Diego. He says,

"In the past, people thought it was vain or shallow to put so much emphasis on appearance. Unless your teeth required a visit to the orthodontist, you got them cleaned regularly and were on your way. I don't think the average person even understands how much the field of dentistry has advanced and all the possibilities that exist now. I now encourage patients to bring in photos of their favorite celebrity smiles or maybe even a picture of a friend or family member whose smile they love, and we start there. Because, honestly, there is a world of possibilities and there is no reason we can't make that ‘shoot for the stars,' ‘something I have only dreamed of' smile happen for anyone who wants it."

As modern technology advances, it becomes easier to study what makes people act and react the way that they do. The information we gain from this can be life changing but it up us to decide what to do with it.