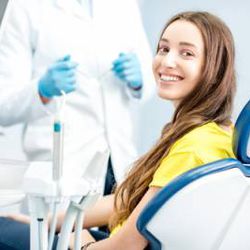 British soap opera star Samantha Womack recently made headlines for undergoing a deep-cleaning gum treatment called Bone One Session Treatment, or BOST, that claims to cure periodontal disease in just one session. Womack claims that after one four-hour sitting, her gums were completely cleaned and essentially cured of periodontal disease. But is this possible? Dentist Martin Abelar of San Diego, California, weighs in.

"The BOST procedure consists of gently pulling the gums away from the teeth to reach underneath the gum line and clean out the bacteria that is hiding inside," he says. "The dentist will actually DNA test the bacteria in each pocket and develop a treatment to kill that specific type of bacteria."

As the name implies, the procedure can supposedly be completed in just one session, but is that enough time to effectively kill oral bacteria?

"It’s hard to say because the BOST treatment is only available in Europe, and only one study has been done on the effectiveness of the procedure," says Abelar.

That study, published in 2004 in the journal L’Implantologie, found the treatment to be effective following a 15-year study of 1,500 patients.

"But it’s troubling that there haven’t been any new studies done in 14 years," says Abelar. "It doesn’t seem like 2004 was that long ago, but in terms of medical technology, 14 years is huge."

Though the BOST procedure is not available in the United States, Abelar says that it is similar in nature to a procedure that is available here called root planing and scaling. Root planing and scaling also deep cleans the pockets of the gums, but it takes the procedure a step further, cleaning the roots of the gums so they can better reattach to the teeth and help re-seal the gum pockets.

"Like the BOST procedure, the scaling portion of root scaling and planing can be done in one session, but typically we like to do root planing in several sessions to help minimize pain and sensitivity," says Abelar. "It really depends on how severe the infection is, and how much the patient is willing to undergo in one day."

Abelar says although the procedure can be uncomfortable, it can be done under local anesthesia, and it's still less painful than periodontal disease and gum and tooth loss.

"It’s a little bit of discomfort for a big payoff," says Abelar. "And it’s pretty much the gold standard in deep cleaning."

As for the BOST procedure, Abelar says while it sounds good, it doesn’t appear to go quite as far as traditional root scaling and planing, so it's ultimately probably not the best solution for treating gum disease.

"With BOST, it seems like you’re getting only half the treatment you’d get with root planing and scaling. It doesn’t sound like it goes quite far enough," he says.