Asthma Sufferers Could Be at Higher Risk of Gum Disease 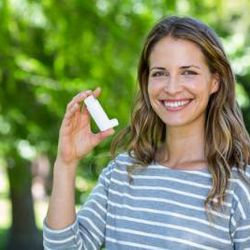 The Centers for Disease Control estimates that one in 12 Americans has the lung disease known as asthma. Asthma is categorized as an inflammation or obstruction of the bronchial tubes. This condition can be caused by environmental issues such as exposure to irritants, as well as by genetics.

For many people, asthma is easily controlled by using a daily inhaled corticosteroid inhaler, combination inhaler, or other inhaled medications or pills that work to keep the airways open. Occasionally, some patients may require more serious treatment with a nebulizer, and even patients with well-controlled asthma may suffer an asthma "attack," which may require the use of an albuterol rescue inhaler.

Now, asthma patients have a new cause for concern: A Brazilian study has found that having asthma may increase your risk of gum disease, too.

The study analyzed 21 research papers published between 1979 and 2017 and found that among the 120,000 people studied, asthma patients were at a nearly 20 percent higher risk of developing periodontitis than those who did not have asthma. Researchers have no idea why.

Dr. Martin Abelar is a dentist in San Diego, California. He has his theories about this increase in periodontal disease.

"There are several possibilities," he says. "One is of course the inflammation that occurs in the bronchial tubes. Inflammation is one of the main causes of periodontitis, and we have already seen that inflammation from other conditions can increase the risk of periodontal disease."

Recent studies have linked inflammation from arthritis to periodontitis. But Abelar says that could be just one piece of the puzzle.

"If a patient has well-controlled asthma and low inflammation, that periodontitis could be connected to their asthma medication," he says. "Some inhaled medications have been known to cause thrush, a fungal infection that occurs in the mouth and can also contribute to inflammation."

But while nobody has a definitive answer, Abelar says there are still things you can do in the meantime to reduce your risk of periodontal disease.

"Make sure you are brushing twice a day, for at least two minutes at a time, and flossing at least once a day," he says. "And if you take an inhaled medication, make sure you are following the instructions of your doctor and on the medicine packet and rinsing your mouth out after you take the medication. This will reduce your chances of developing a fungal infection like thrush."