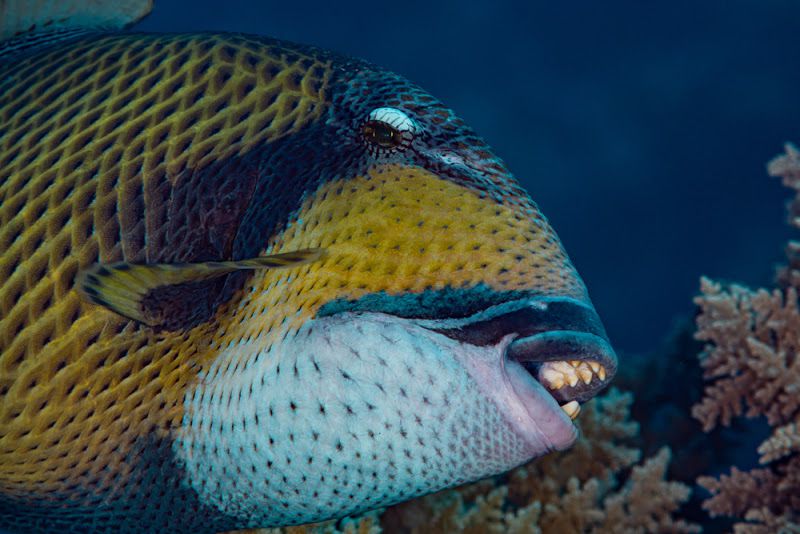 Here’s another mystery that could be "reel" or could be another "fish tale." A weird-looking fish with human-like teeth and lips recently grabbed headlines when its picture circulated on social media. It began with a tweet from someone using the Twitter handle @raff_nasir, a fisherman in Malaysia, and quickly gained steam, being circulated around the world, even being featured on Fox News, CNET, and The Mirror. But many cried foul at the fish, saying it cannot be real.
The fish species, known as a triggerfish, is real, that much is certain. Triggerfish even have big, puffy fish lips, which in some instances could look similar to human lips. But what has many people skeptical are the fish’s teeth.
The teeth of a real-life triggerfish don’t really resemble human teeth at all. They look like, well, fish teeth, and thus many who are familiar with the fish doubt this particular specimen is the real thing.
Dr. Martin Abelar is a dentist in San Diego. He says the teeth in the photo definitely look human, but he’s not sure if it's a hoax or not.
"The shape of the teeth certainly looks like the shape of human teeth and not like the teeth of a fish," he says. "They are more square than the traditional triggerfish teeth we’ve seen in other specimens, which is why people doubt this is real. The shape of the teeth of this one would probably make it difficult for this particular fish to eat and survive."
But is it really that weird that human and fish teeth could look similar? Recently a study revealed that human jaws may have evolved from ancient fish who had jaws with teeth anchored to them. The teeth may not have looked like human teeth, but the growth pattern of those teeth is similar to the growth pattern of today’s human teeth, leading scientists to believe that this particular species is responsible for our own oral setup. So if we descended from a fish, it’s not that far-fetched to think there could be fish out there with human-like teeth.
"There are many mysterious creatures in the ocean we simply don’t know a whole lot about, and this could very well be one of them," says Abelar.