A Vaccine for Gum Disease 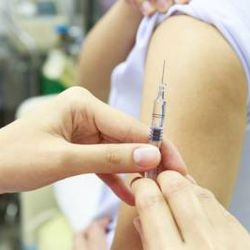 Gum Disease, also called periodontitis, occurs when bacteria builds up around the teeth and gums. Symptoms include red, swollen and sometimes bleeding gums (especially when flossing), bad breath and even loss of teeth. More than three million people are diagnosed each year with this disease in the United States alone.

There are actually three stages associated with the progression of gum disease:

In this stage, the gums become inflames and red and often bleed after brushing and flossing. During this time, the disease is still in early enough development that it can be reversed with increased oral care and professional cleaning.

At this point, some of the damage is now irreversible. Tissues, gum, and bone are beginning to be severely affected by the bacteria and plaque build up. Pockets have begun to form below the gum line, and professional care is needed to stop the progression of the disease

The most severe form of gum disease, by this point the tissues, gums and even bones are becoming destroyed, and teeth are loosening. Some may even fall out.

As you can see, catching gum disease early can greatly reduce the amount of damage that is done and the amount of work that is needed to repair the mouth in the aftermath of this disease. One of the greatest struggles faced by those who are diagnosed with gum disease is the reoccurrence of the bacteria even after treatment. For 15 years, researchers and scientists at the Oral Health Cooperative Research Centre at The University of Melbourne have been working on a solution. They have developed the world’s first therapeutic dental vaccine that they believe can help cure those suffering from periodontal disease. Now, thanks to validating research by groups in Melbourne and Cambridge published in the NPJ Vaccines journal, they’re taking their work to the next phase, trials.

Gum disease has been treated for decades with antibiotics and manual removal of the affected area, and sometimes this means surgically. The problem is that the bacteria often comes back and it becomes a widespread chronic battle.

"There was an old saying in the early days of dentistry, ‘Floss or die.' Back then we didn’t even know a link existed between periodontal disease and heart disease, stroke and diabetes. Now we know, so maybe there is some substance to that after all. The oral cavity is the gateway to the body and general health. The CDC is still continuing to uncover links between gum disease and other serious health conditions. So far, heart disease and stroke have been the most concerning discoveries."

The vaccine targets those who already have periodontitis and works by stimulating the production and release of antibodies from the gum tissue which binds to the bacteria and stops it from attaching to the tooth root. This puts an end to the continued cycle that occurs when the bacteria simply keeps coming back and recolonizing after removal.

Prevention is, of course, always the best course of action Abelar says.

"Gum Disease is the most common disease known to man. Over half of the American population suffers from some form of it ranging from moderate to severe. It’s also the most preventable disease known to man. That might be a slight exaggeration, but not by much. Our frontline defense is simply a consistent oral hygiene routine and professional cleanings every six months because you just can’t get into all the areas a dental hygienist can."

In 2018, trials of the vaccine are expected to begin with partner CSL, a global biotherapeutics company and creator of the second largest influenza vaccine company in the world, according to Eric Reynolds, the University of Melbourne’s OCRC chief executive.