A Dental Implant That Protects Teeth From the Inside 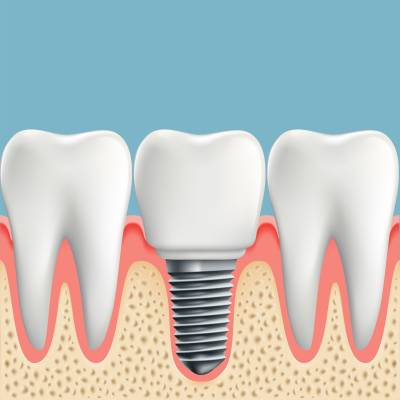 Three million adults in the United States have dental implants according to the American Academy of Implant Dentistry, and the numbers are rising each year by about 500,000. A dental implant is the best way to replace a missing tooth according to Dr. Martin Abelar, DDS, a leading cosmetic and restorative dentist in the San Diego area.

"When a tooth is lost the only way to keep the jaw bone strong and the other teeth from shifting to fill the space is with an implant because it fills the space all the way into the root," Abelar said. "Many people don’t realize that over time, the bone loss associated with a missing tooth can even cause premature aging as the jaw bone plays a big part in our facial structure."

According to the American Association of Endodontists, the success rate for dental implant placement is well above 90 percent. Although implant failure isn’t common, the reasons for it include rejection from the jawbone, failure to connect with the jawbone, nerve or tissue damage, allergic reaction and infection. The most common of the causes is infection also called peri-implantitis says Abelar.

"Our mouths are naturally full of bacteria and sometimes these bacteria can form a biofilm on a dental implant which eventually leads to an infection," he said. "Although it can happen to anyone, some risk factors for this infection include poor oral hygiene, smoking and patients suffering from diabetes."

When an infection occurs around an implant the first course of action is usually antibiotics. Next, the dentist may do a deep cleaning, removing the screw and using an antimicrobial gel to help fight off infection. However, if the infection is strong enough the implant may have to be removed as the bone just can’t heal with the implant still in place in some cases. Removing the implant is always the last course of action and even if it has to be removed it’s often possible to replace the implant once the area has healed.

Thanks to scientists and researchers at the University of Leuven in Belgium, these infections may be something that can be easily fixed and prevented in the future. They’ve developed a prototype implant with a built-in reservoir that can hold antibacterial and antimicrobial solution that can help prevent and treat infections. The solution is slowly released through the porous surface of the implant and can even be refilled as needed by unscrewing the crown that is placed on the implant post.

Now infections can be stopped before they even begin by placing an antimicrobial mouthwash solution in the implant when it’s first placed. The scientist says their laboratory tests show that it has been successful at stopping a layer of biofilm from forming in the first place.

Although there is still a lot to be done and tested and researched before something like this hits the market, it’s incredible to think of what the future of dental medicine may hold.

A new study aimed at determining whether teeth are more prone to cavities thanks to genetics has found ...

Believe it or not, fall is right around the corner and so too is either the most wonderful ...

Why Wearing Prescribed Retainers Is So Important

Retainers. Love them or hate them, they serve an important purpose. Yes, they keep your teeth aligned, that ...

With the pandemic still very much present in our daily lives and many of us still on quarantine ...