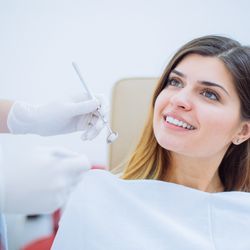 If you’ve ever watched reality TV, you’ve probably noticed that a lot if it isn’t quite rooted in reality. With outlandish storylines and some notoriously bad acting, reality TV is very entertaining - but oftentimes that’s about it. Maybe that’s why a recent article about a reality TV star on Bravo’s "Don’t Be Tardy" has left a lot of people wondering just how real a certain scenario is.

It all started when a story posted on the social media site Instagram by one of the show’s stars, Brielle Biermann, claimed that Biermann’s jaw was "melting." In the story, Biermann noted that although she has had some cosmetic procedures, her teeth are natural and she’s had no veneers. Unfortunately, according to Biermann, the alignment of her teeth isn’t quite perfect.

Biermann then said her jaw would need to be broken in several places to be treated with braces, and that her jaw was "melting" as a result of the positioning of her teeth. But is this really possible? We asked Dr. Martin Abelar of San Diego, California, to weigh in.

Abelar says another procedure for making teeth align better is removing some teeth, but in recent years orthodontists and dentists have tried to avoid this method, especially as technology has improved.

As for her jaw literally melting, Abelar says this is not possible - at least not in the way it sounds.

"Sometimes the jaw can erode if there are teeth missing, which is why we recommend getting dental implants or dentures as soon as possible following tooth loss," he says. "This is because the longer the jaw goes without a tooth, the more erosion it can face."

This erosion makes it more difficult to get dental implants later, and left untreated can cause the loss of the entire jawbone, though he does not know if Biermann is missing any teeth for this to be an issue for her.

As for the overall condition of Biermann’s teeth, Abelar has not treated her so he cannot speak to this, but he says if she is concerned about the positioning of her teeth she should speak with a board-certified orthodontist or dentist.

"Patients should not be worried that their teeth are causing more harm than they actually are," he says. "If you are at all scared or there is any question about the health of your mouth, speak to your dentist for reassurance."